A Metaphor From The Midwest 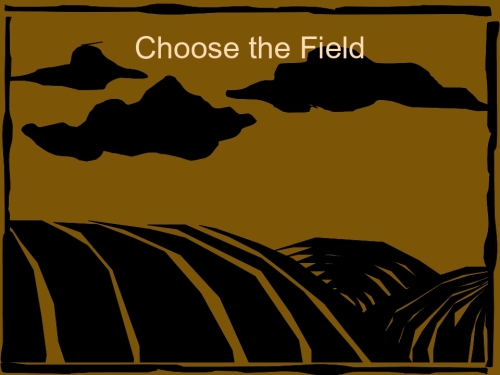 When thinking ahead to the harvest, you first need to decide where you will plant the seeds you want to sow. To some extent you will be constrained by geography. As you assess the field you will also need to consider the suitability of the available land and climate for different types of plants. For example, it is easier to grow wheat and corn in the Midwest than rice or cotton. There are other questions to ask as well: has the quality of the soil been depleted by past crops? Has the soil been weakened from the use of fertilizers designed to boost short term growth? In planting, as in politics, overuse of any one technique generally leads to poor growth and diminishing returns at harvest time. Worse still, the soil may be poisoned by overuse of herbicides or pesticides.

As we consider our political field, there are also limits on what we might do. Our representative form of democracy sets some constraints as does the constitutional separation of powers among the executive, judicial, and legislative branches. There are different levels (local, state, or national) on which our political discussion is occurring. Certain issues and problems align with certain branches or levels of government more so than others. Each of these levels, though, informs and affects the others, and so their interactions must be studied and understood.

Regardless of the level at which our field is located, there are many past actions and trends that have depleted and poisoned our political soil. At least three of these could be remediated through dialogue.

The first trend that could be remediated is the categorizing of broad groups of individuals, whether by location, education, race, culture, or economics, into the “them” that threatens the “us”. This stereotyping has been an intentional focus of “wedge politics”, a strategy designed to maximize the returns (in votes and dollars) for both of the dominant political parties. The heated, polarizing, and partisan language used by many political leaders, which is repeated through social and other media, is as poisonous to our democracy as herbicides and pesticides  that leach into soil and water. Such language strangles the growth of new ideas, restricts our ability to consider facts that are different from our preconceptions, and makes it easier for us to deny the humanity, aspirations, interests, and needs of others. The dangers of “Themification” are summarized well in this Ted Talk by Dick Simon. We have moved away from the “united we stand, divided we fall” sentiments that grace many of our public spaces, towards a “what’s in it for me and my tribe” focus.  By doing so we have limited our ability to plan for and take pragmatic steps toward a future that might benefit us all.

The second poisonous trend that could be remediated through dialogue has been the rise of a passive notion of citizenship.  We elect our “gladiators” and sit back to cheer or jeer.  Too few of us engage in the the hard work of informing ourselves, working through the competing choices, or getting directly out into the arena. The media and political parties have been only too happy to lend their support to feeding this “blood sport” of politics by handicapping the players, and focusing much of their effort on raising money in order to “win” the most current “contest”. This approach has eroded both our individual and collective capacity for the critical  analysis that most complex problems require. Instead of identifying and engaging voters on the difficult trade-offs involved in finding solutions, the parties and media are more likely to present “slices” for consumption – dividing complex problems into a series of isolated issues.  These “slices” are often then supported with data that are incomplete or taken out of context, and are argued as if there were a single definitive “right” or “wrong” answer.  This way of presenting what are, in fact, complex issues is highly misleading.  Framing these issues in simplistic either/or terms also ignores the reality that the analysis of most complex issues requires reasoning within multiple systems (e.g. information, values, interest, experience, etc.) and some element of subjective judgment. These fundamental flaws in our collective reasoning are  rarely discussed and often go unnoticed. As we fail to consider the integrative effects and trade-offs across issues we miss opportunities both to identify and to work together to implement solutions for our common good.

The third poisonous trend is the rise of a “bullshit” and celebrity driven entertainment culture that has infected both our news and our ability to reason together.  What do we mean by a “bullshit culture”? In his best-selling book from 2005, “On Bullshit” , Princeton professor Harry Frankfurt attempted to provide a framework to describe communications made with no objective factual constraints or boundaries.  He characterized these as statements “unconstrained by a concern for the truth”, or “bullshit”.

The fact about himself that the bullshitter hides . . . is that the truth values of his statements are of no central interest to him; what we are not to understand is that his intention is neither to support the truth nor to conceal it. ” (55)

A person who lies is thereby responding to the truth, and he is to that extent respectful of it. When an honest man speaks, he says only what he believes to be true; and for the liar, it is correspondingly indispensable that he considers the statements to be false. For the bullshitter, however, all of these bets are off: he is neither on the side of the true nor on the side of the false. His eye is not on the facts at all, as the eyes of the honest man or the liar are, except insofar as they may be pertinent to his interest in getting away with what he says. He does not care whether the things he says describe reality correctly. He just picks them out, or makes them up, to suit his purpose.” (55-56)

[The bullshitter] does not reject the authority of the truth, as the liar does, and oppose himself to it. He pays no attention to it at all. By virtue of this, bullshit is a greater enemy of the truth than lies are.” ( 61)

The leaching into our political sphere of a tolerance for, and even admiration of, bullshit as a means of discussing serious political issues, has further eroded our ability to think critically about and solve the problems we face as a country.  In a culture that often mistakes celebrity — conferred by the ability to entertain or simply attract publicity– for character or merit, this tolerance for bullshit as political speech is even more damaging.

So, what harvest do we want? Do we want a “government of, by, and for the people”? Do we even believe that is possible? Our current political soil neither nurtures the sense of community that many citizens say they want nor promotes pragmatic problem solving for the common good. Taken together, the above trends have led many to believe there is no way even to discern what that common good might be, and so feelings and affiliations take the place of hard facts and critical analysis in making decisions. If we aren’t willing to change or challenge these trends, we will continue to be disappointed in our political harvest.

We have a workbook that can help you assess civic health in your community, and other resources for building dialogues.

11 responses to “Choose The Field”

This site uses Akismet to reduce spam. Learn how your comment data is processed.